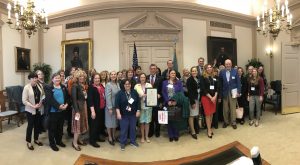 Despite some controversy about what year this Legislative Day actually was, we celebrated our 25th anniversary with gusto!  Here are the highlights:

A mighty thank you to the many who helped make Legislative Day 2017 a success.  Your participation, no matter in what degree, made this whole process work for all.  It is greatly appreciated.

…and to each of you for your attendance and ongoing advocacy efforts.  Together, we are speaking clearly with one voice about the value and importance of our libraries.